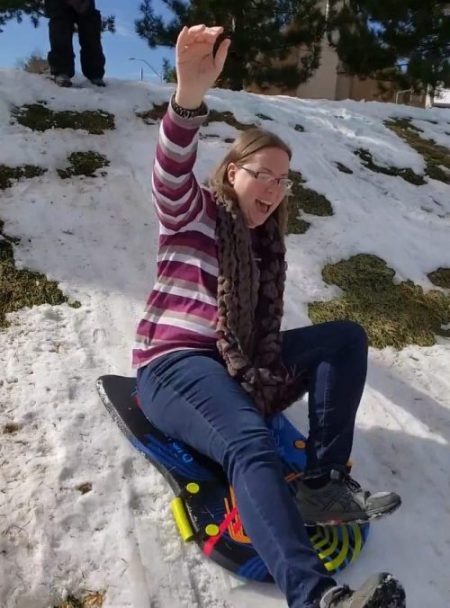 I used to believe the term academic was reserved for graduate students and professors, and that going into industry would mean giving up that identity. Now I know better.

Only 3% of those with a PhD will become tenure track faculty.

The transition to industry is difficult, and we need to talk about the practical challenges, emotional costs, and mental effort needed to make the jump. It is easy to forget that academia is just one field, and a rather small one at that. There are many other sectors out there to explore! I’ve seen people with advanced degrees get positions in medicine, technology (like myself), government, and nonprofit. There shouldn’t be a taboo about leaving academia when the majority of graduates are advancing on to positions with great pay and benefits.

Since many of us with a PhD are expected to become professors, there is little guidance for making the jump to industry. We are taught how to write curriculum vitaes, not resumes, and the nuances to portfolio presentations in industry are vastly different from those in higher education. I wrote a bit about these issues in Five ways your academic research skills transfer to industry.

The hardest part for me personally was the mental and emotional toll of losing my academic identity. We all know the saying that once you leave academia, you can’t go back. We wrongly believe that whatever reason causes us to leave academia is the same as willfully choosing to give up a part of our identity. At least, that is how it feels after spending literal years being trained for one and only one job.

I am hopeful that this conversation comes up during your first year in graduate school, so you can minimize a bit of the emotional and mental toll that it takes to leave academia. Because let’s face reality here: most of us will not get a tenure track position. And that is okay! In fact, for most of us that is better than okay! Yes, it might feel depressing to recognize that reality. You might be incredibly sad. You may feel heartbroken because it’s the only job you’ve known and/or wanted for the last few years. I acknowledge and respect those feelings. But I also know you will go on to do something else because in the end, being a professor is just a job. And there are so many jobs in the world that PhDs are capable of doing.

When I first left academia, I felt that too. I spent weeks agonizing over my choice. I subjected my partner to a 20-hour long drive (round trip) while I worked through all of those feelings and all of those anxieties. It felt like I was leaving a part of me behind because I gave up tenure track to go to industry. I didn’t know if I could continue publishing my own research. I didn’t know if I could still teach people things I found interesting. I was afraid of making the wrong choice and closing a door on a career path that I had spent so many long years working toward and had finally achieved. I was terrified.

Then I started working in my first role outside of academia, in the technology sector. I joined a research team that was agile, meaning research moved at a very quick pace and cycled every few weeks. Several of my colleagues also came from an academic background and held advanced degrees, so they understood what I was going through. They were a great resource for learning the ropes and making the transition smoothly. Through that first opportunity and subsequent offers, I discovered that what I enjoyed most about academia was the freedom and autonomy to pursue research in ways that I saw fit, which I had in every role I’ve taken since finishing my PhD. And though I miss my particular niche of research and the courses I taught, I am finding so much more fulfillment in my day-to-day work than I originally expected, simply because it has that freedom and autonomy I value so much.

From my experience, it took about a year to really come to terms with the fact that I would likely never return to academia, at least in the very strictest sense. But something I also learned is that I am still very much an academic, despite closing that first door to staying in higher education. I can still change people’s worldviews and make a difference. I can still be an educator and teach people things they didn’t know. I can still be a researcher and scholar and all of those things that come together to make me an academic. The only difference is instead of being called professor, I took on the title of user researcher, design researcher, behavioral scientist, or research scientist as my job dictates. I will always be an academic no matter where I go.

Addendum: My experience is with the US higher education system. Experiences in academic systems outside the US may be different.